Your dog might be your best friend, but if he’s a little noisy and likes to bark, your neighbors probably don’t feel the same way about him as you do.

Barking comes with the territory when you own a dog, and it’s just your best pals way of expressing himself.

However, there are people who don’t feel the same way as you do about barking and sometimes it’s necessary, for the greater good and the sake of cordiality you have to find a way to dampen your dog’s volume in order to keep the peace and maintain a friendly relationship with your neighbors.

And while it might seem like an almost impossible task to stop your dog barking and lessen the impact that it can have on the people in your neighborhood, it's actually a lot easier to do than you probably think it is.

That’s why we’re going to share some tips on how to stop your dog from barking and how you can minimize the effect that his woofing can have on your life and the lives of your neighbors by soundproofing his crate or kennel.

Soundproofing A Crate And A Kennel

The inconvenient truth is that there is no way to completely soundproof either your dog’s crate or his kennel.

The only way that you can completely eliminate the noise that his barking makes is by moving his crate into a fully soundproofed room in your home.

While that might seems like a viable option on paper, in reality, it’s completely impractical as the cost of soundproofing a room would almost certainly completely wipe out your bank account and the disruption it would cause, not to mention the loss of living space, means that it’s a pipedream solution at best.

However, even though you can’t completely soundproof your dog’s living space and happy places, you can reduce the level of volume that he creates while he’s spending time in either of them. And it won’t cost you an arm and a leg to do it.

Unless your best friend spends most of his time outside in your yard or garden, which let’s face it isn’t very likely, his second home is probably going to be his crate, which is why we’re going to look at some simple, but effective ways to dampen the noise that emanates from your dog’s home inside your home. 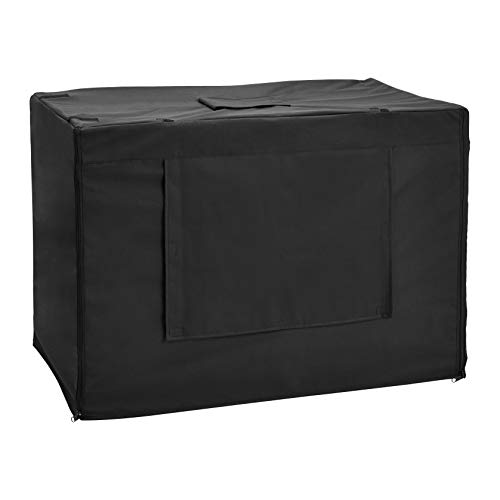 It might seem like an obvious answer, but the most straightforward way to reduce the noise that your dog makes while he’s in his crate, is with a crate cover.

While it won’t turn the dial on his volume control down by much, you’d be surprised at the difference that a good crate cover can, and will make.

And, as well as being fully washable, a crate cover will also give your dog privacy and help him to feel safe and secure in his crate, which means that as well as helping to keep the noise down, your dog will be happy too. 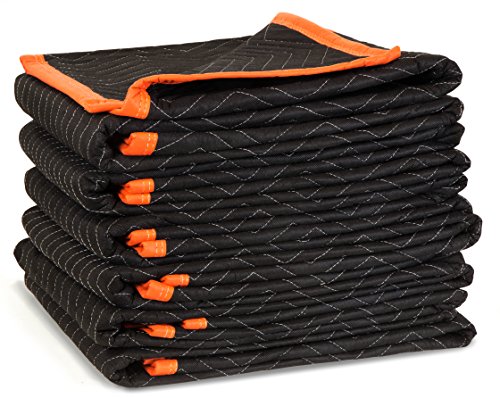 While standard house blankets won’t have any discernible effect on the noise that your dog makes when he starts barking, thicker, padded moving blankets can effectively well, blanket and dampen the volume of his woofing.

Granted, they won’t completely wipe it out, but covering your dog’s crate with a moving blanket will help to lessen and control the sound of his barking.

And again, by covering his crate while he’s inside it, you’ll make him feel more secure and safe in his crate.

There are, however, a couple of things that you’ll need to take into consideration if you’re looking for a way to soundproof your dog’s crate.

Crate covers have been specifically designed to provide ventilation and allow a small degree of light to enter your dog’s crate, but moving blankets haven’t.

Covering your dog’s crate with a moving blanket isn’t a permanent solution, and if you do choose that option, you’ll need to check your dog every hour or so.

By covering his crate with a moving blanket, you could increase the temperature inside it to a level that’s dangerous for him, and the lack of ventilation could exacerbate the issue, so it’s vitally important that if you do cover your dog’s crate with a blanket, that you regularly check on him, and lift the blanket for a brief period to let cool air in and regulate the temperature inside his crate.

These also work well to soundproof a bird cage.

Moving Outside - Soundproofing A Kennel

Being inside your home, it’s always going to be easier to reduce and control the noise your dog makes while he’s in his crate.

Kennels pose their own unique set of problems, and in order to diminish the impact that your dog’s barking can have on your neighborhood while he’s spending time in his kennel, you’ll need to be a little more creative.

As he’s already outside, his barking is going to be louder, so you’ll need a more effective way to turn his volume down.

Luckily, thanks to the way that they’re built, kennels are actually easier to soundproof than crates are, and you can use the same materials to lower your dog’s acoustic impact while he’s in his kennel as you would if you were going to soundproof a room in your home.

And the best way to soundproof, or at least reduce the noise of your dog barking, is with acoustic paneling which is easy to fit inside your dog’s kennel with some double-sided tape and glass glue.

It’s also completely safe for your dog, as the paneling was engineered and created to be fitted in studios and houses, so it won’t have any impact on his health or cause any unforeseen problems for your best friend.

There is, however, one issue that might be slightly problematic.

If you do soundproof the inside of your dog’s kennel, if he barks while he’s inside it, the sound will be reflected off the interior walls and channeled out of the only exit available, which is the always open door that your dog uses to get in and out of his kennel.

In essence, you’ll be turning your dogs’ kennel into a megaphone, and while the sound of his barking will only emanate from one place, it’ll be a lot louder when it is channeled out of the door.

Teaching Your Dog To Stop Barking

While you can reduce the disruption that your dog barkings can create in your neighborhood, the problems associated with doing so mean that the solutions are almost as troublesome, tricky, and difficult to deal with as your boys barking problem is.

It all comes down to training.

So rather than attempting to control the issue, it’s better to confront it head-on and attempt to find a way to stop your dog from barking unduly.

We’ve never subscribed to the school of thought that believes that dogs should be muzzled to control their barking, and the only time a muzzle should be used is for your dog's protection when they’re placed in a situation that might cause them to react out of fear and panic.

Comfort – One of the main reasons why dogs bark is uncertainty. It’s an emotional response to an unfamiliar situation that they have difficulty dealing with.

So, it’s important to help your dog to gradually adjust to every new situation with the sort of positive reinforcement that teaches them that they don’t need to be scared of, or frightened by, uncertainty as you’ll always be there for them and that they can deal with any perceived threat calmly.

Separation Anxiety – One of the primary reasons why a lot of dogs bark is, as we’ve already mentioned, fear and in particular, the fear of loneliness and not knowing if their owners are going to come back when they leave them alone in the house.

This is more commonly known as separation anxiety and is an incredibly common problem that a lot of dogs suffer from. It’s also incredibly easy to deal with and help them to overcome.

If your dog does suffer from separation anxiety, the best way to help them to overcome it is by leaving them alone in your home for a short period of time, and then when you do return, make them the center of your world when you walk through the door.

By gradually increasing the amount of time that you spend away from them when you leave the house, you’ll teach your dog, and he'll gradually learn that you’ll always return and the fear of being left alone that makes him bark will soon disappear.

And he’ll be quieter, happier, and far more confident.

Safe Space – Crate training your dog can also help him to stop barking. By providing a space that he feels safe in, and can retreat to when he feels worried, frightened, or stressed, you’ll reduce his need to bark, and he’ll know that he always has somewhere to “hide” when he needs to feel secure.

It’s relatively simple and is usually most effective when it’s done with a combination of positive reinforcement and rewards (usually treat based) so that your dog realizes and understand that his crate is his, and somewhere he wants to be, rather than somewhere he feels that he needs to be, or that you want him to be.

And under no circumstances should your dog ever be sent to his crate as a punishment, as doing so will only teach him to bark as a way to attract your attention.